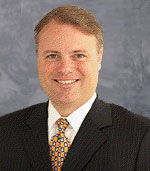 He has successfully tried jury cases to verdict and has otherwise served as lead counsel for clients in district courts all across the United States, the U.S. Court of Appeals for the Federal Circuit, and the Ninth Circuit.